We’ve been adding more complex puzzles for the past few days. This sunset puzzle originally is 70×39 pixels and here it is quadruple sized for your convenience.

And here is the time-lapse video from the very start with a blank canvas. It’s just missing the final touch-ups. 🙂

Pixelrama is making some noise

We decided to add some “cheap” juice really early, so we started playing around with sound effects. The challenge is that, currently, we have no musician in the team, so we are improvising as we go.

Since the idea of the game is supposed to be a calm, minimalistic experience, we tried simple and clean sounds as well. For the rotation action, we experimented with about 10 different sounds or variations. We’re still not sure about it, but we think they sound pretty good, at least for now.

Once you complete a region (a small colored portion of the puzzle), you will hear a pleasant sound of just two notes. If you complete regions fast enough, you will hear the two notes being played in a sequential progression, getting higher and higher pitch. Currently, we have 8 distinct sounds for completing a region.

And, of course, when completing the whole puzzle, you should also expect to hear something gratifying. The game then will play a bright and uplifting note progression in an arpeggio fashion. Fancy description, but this is how it sounds like:

What do you think about the sounds? Do they sound good to you?

Some drawing sets we have so far

As the Pixelrama levels grew larger we noticed their creation time grew just as much. So we decided to prioritize optimizing the puzzle generation code to improve testing time since it would be necessary before releasing the game anyway.

After running the profiler and gathering some data, we found out there were two main problems:

After some brain storming trying to find ways to solve those problems, we came up with solutions that seemed very effective and were relatively easy to implement, described next.

To tackle the issue of massive recursive coloring, we just changed those random rotations to NOT recalculate the colors after rotating. Then, after all those initial rotations are finished, we ran a code that would update all the colors just once. This solution lowered the percentage of total time spent creating a level from 50% to something around 0.01%.

This one was a little bit harder to solve, as we could not find a faster way of instantiating a lot of objects in Unity. So we decided to fix it a little bit differently with these two steps:

1. We added culling to the camera, keeping on the scene only the pieces that are visible and reusing those as the player pans the camera. This solves the problem partially because if the player zooms out, it was still necessary to instantiate a lot of Prefabs which still caused a slowdown.

2. We stopped rendering the tiles when the player zooms out to a certain amount (it would be hard for the player to play at this level of zoom anyway) and replaced them with a mock of the puzzle, showing finished regions with their respective colors and white for unfinished parts.

For now, our performance problems are fixed, although some questions arose around these solutions. Would the players prefer to view all the tiles when zoomed out, instead of the unfinished image? Also, how many tiles can we show on the screen at the same time without slowing down older devices?

We think these questions can only be answered by gathering more data by allowing more people to playtest the game, which may happen pretty soon.

A new project on the rise

We’ve been working on a project for a while and we want to share a little bit about it.

It’s a game called Pixelrama and it’s about positioning paint-carrying puzzle pieces to form a beautiful yet simple pixel art drawing. Think as a mix of Pipe Mania, classic jigsaw games and Picross. Maybe it’s better to show a really early-stage GIF of it:

The game is going to follow the same minimalist aesthetic of Piques, but this time around, with a little more of a zen gameplay.

Currently, we have in mind an Android and Desktop release. We would love to have it also for iOS but we need to wait for the project to move forward and check if there is interest enough in the game for us to invest in Apple devices.

So stay tuned for more info and thanks for reading!

Body Crisis is out! Our entry for LD46

But we’ve got a new small game for you.

This time is for Ludum Dare 46 game jam with the theme: Keep It Alive.

Check our entry by clicking here!

Your organs are unstable and may stop working at any time, causing then to lose health rapidly. It is your job, then, to restore them to full health by correctly using the corresponding input for each organ.

Each individual task is relatively easy to execute, but don’t underestimate the capacity to be overwhelmed. If any organ health reaches zero it fails and you lose the game. You can start over from the beginning of the same level though. There are 6 levels in total.

Play music on the subway in SubMoney, our entry for Ludum Dare 44

You’re a broke musician trying to get by. Day after Day. Bill after bill. You must play in subway stations to get enough money to pay for your daily expenses.

To aggravate your situation, the city you live in does not allow artists to play in subway stations, so you need to keep an eye open for the guards. If they get you, it’s the end of the day. If you see or hear one of those guys, RUN! You can also take the metro to lose them.

Your expenses are deducted from your money at the end of each day, which occurs when the timer on the bottom left runs out. The expenses increase in a daily basis, so play your heart out to get the best tips.

Each subway station has a different public, with different taste in music. You need to look out for the right genre to play.

For Ludum Dare 40, we bring you “Courier Springs”

Welcome to Courier Springs, a small town desolated by a recent sandstorm. This does not mean that people don’t want their stuff delivered! Be the hero this town needs!

Your objective is to get rich! So you have to deliver as many packages as possible per day.

Choose wisely and become the richest person in Courier Springs!

Displaced is an action adventure game set in a distant future where humans settled in other planets. You are the Captain of your own ship. Unfortunately, it ran out of fuel after a recent skirmish, and fell in a suburb planet nearby, making you black out on the impact.

Check out the entry here.

Our entry for Ludum Dare 38: Communitas

We tried to blend a city simulation game, a resource management game and the /r/place on reddit.

We almost ran out of time to submit, so a lot of ideas and content are missing. Give us some feedback! 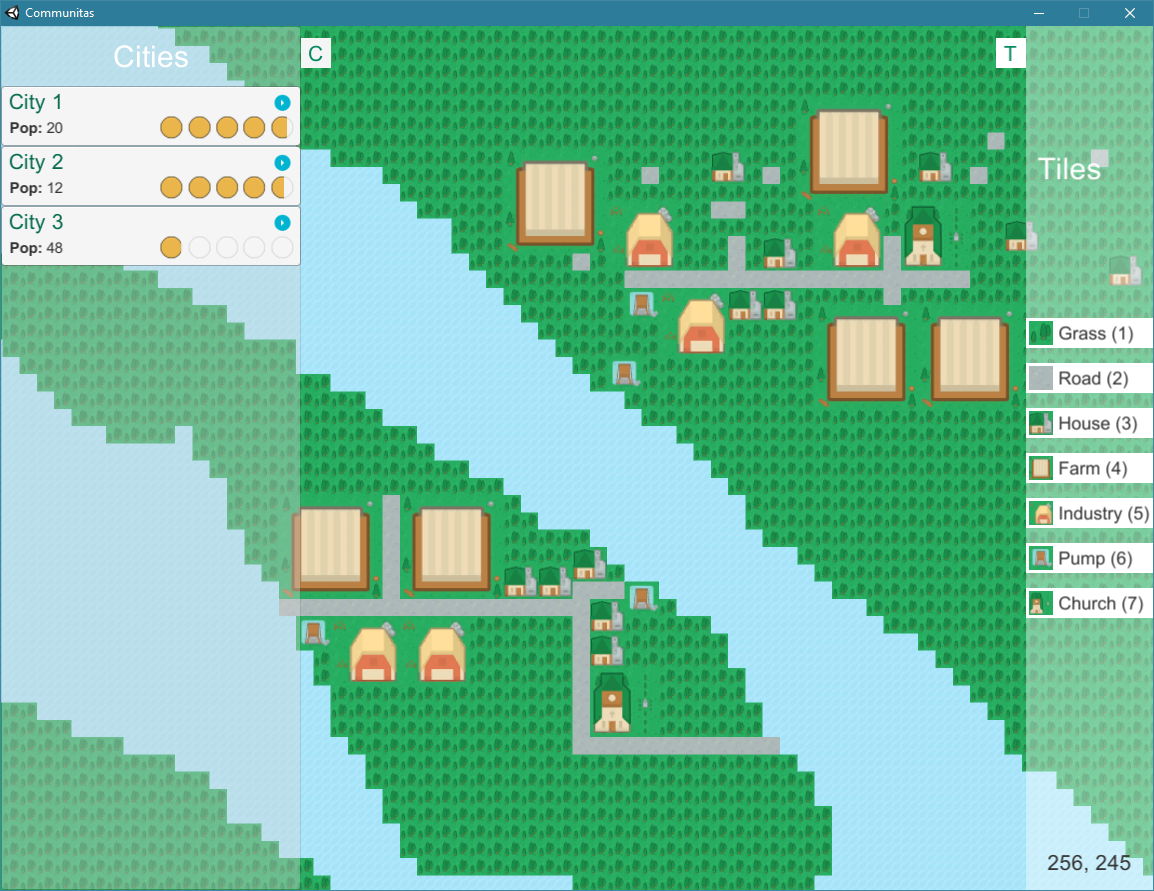